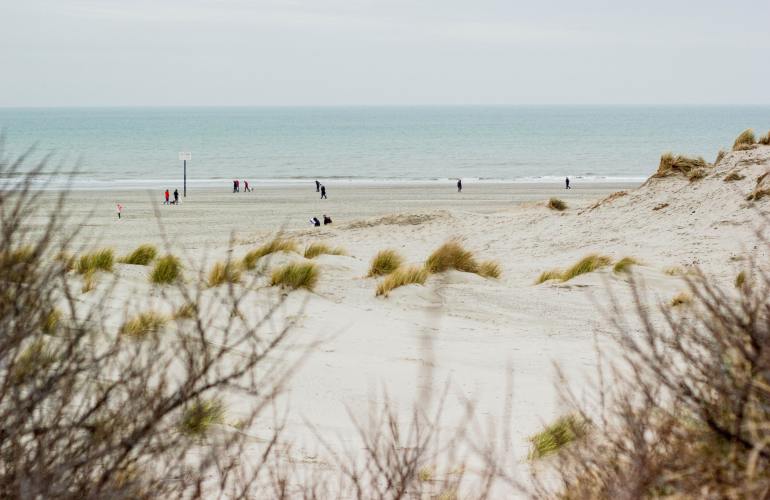 In these hard times, where the world gets tortured with the Corona virus, intercultural communication in the professional life is a daily situation. There is a lot to learn from other countries in these difficult times. But there are so many different approaches, so where to start?

It’s a hot topic, intercultural communication in business. Popular magazines are writing articles about it, like for example Marie Claire did in March 2020. There are numerous pages on social media tackling difficulties in specific areas, for example in HR. And now with the current situation in the world countries depend more on each other than ever before. Why? Because we are very well aware of what is happening in the world. Helping each other out, doing business with other countries, it all depends on the communication.

At this moment, you are probably reading this blog because:

In order to get a head start in understanding these cultural differences you might need some tools to achieve your goals. Practical skills that make you take charge. What do tools bring you? They help you recognize certain behavior in a way that you can anticipate to it. On of my all time favorites is the Hofstede tool to compare countries. I have used this tool for the examples below.

Let’s take a look at the Netherlands: This image shows us that the Netherlands through the 6 dimensions model of Hofstede. As Hofstede claims: it gives “a deep overview of the deep drivers of Dutch culture relative to other world cultures”

A low score on the dimension Power Distance relates to independent people, equal rights and hierarchy for convenience only. Which leads to the next dimension: Individualism. The Netherlands scores very high, in society this means people are expected to take care of themselves and their immediate families only. On the next dimension: Masculinity, the Dutchies score very low. This means it is a feminine society. In feminine societies the work/life balance is very important. Also everyone should feel and be included. Uncertainty Avoidance is relatively high in the Netherlands, this is seen back in for example an emotional need for rules and punctuality. There is a relatively high score on Long Term Orientation, this can be seen back in the pragmatic nature of a lot of Dutchies. Other aspects related to this dimension for example are the tendency to save and invest for the future. The last, and latest dimension Indulgence, scores high. This is seen in for example the attitude of enjoying life, having fun and expressing optimism.

Now we know how to interpret the Hofstede dimensions for the Dutch, let’s see how they compare to our friend America. Blue is the Netherlands, purple is the United States:

What we see is that the Power Distance is almost equal, but the the Unite States is even more individualistic than the Netherlands. Scoring this high on Individualism in combination with the low score on Power Distance is reflected in American premises such as “liberty and justice for all.” The score on Masculinity is high, this reflects in the typical American “strive to be the best you can be”. This results for example into people feeling comfortable to talk about their successes and achievements. This is the first big difference with the Netherlands, were talking about your successes and achievements is not common because it is considered bragging. This might leave others to feel not included. It is a typical aspect of the more feminine cultures, like the Dutch, to create inclusiveness this way. On the dimension of Uncertainty Avoidance the Netherlands and the United States score similar. Both countries have a fair degree of acceptance when it comes to new ideas and innovative products. On the dimension of Long Term Orientation we see the second big difference with the Netherlands. The States scores low, which makes people for example prone to check and analyse any given information. And although Americans might be very practical, they are not the most pragmatic. The last dimension Indulgence has a similar score to the Netherlands. People like to “work hard and play hard”.

Let’s make one more comparison: the Netherlands, United States & Iran. In the graph below blue is Iran, purple is Netherlands and Green us United states: 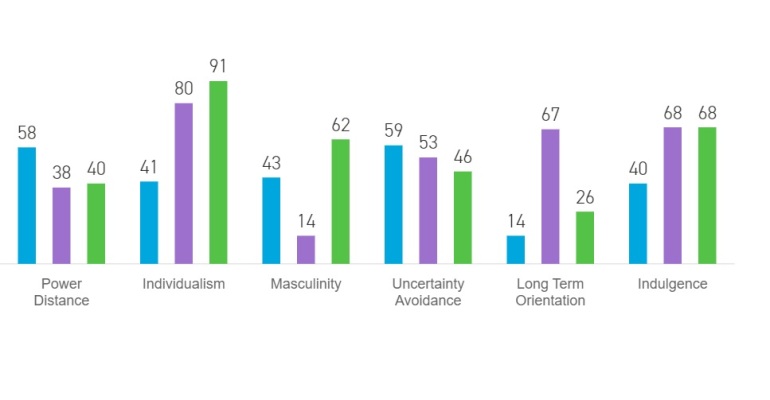 In Iran, the dimension Power Distance scores higher than it does in the Netherlands and the USA. That means Iran is a more hierarchical society in comparison to the other two countries. A more hierarchical society means that people accept a hierarchical order in which everyone has his or her own place. A big difference can be found on the dimension of Individualism, with a score of 41 Iran is considered a collectivistic society. In collectivistic societies loyalty is key. Relationships are strong, people carry responsibility for the groups they are part not so much for themselves as an individual. In combination with rather low score on Masculinity this results in looking for consensus, compromise and negotiation. When it comes to Uncertainty Avoidance Iran has a high preference to avoid uncertainty. A high score on this dimension results in maintaining rather rigid code of believes and behaviours. In comparison to the Netherlands and the USA, Iran has an extremely low score on Long Term Orientation. Such low score can be found in countries with a strong normative cultural orientation, where people are normative in their thinking. This results in great respect for traditions, small focus on the future and focus on quick results. The last dimension Indulgence shows us a relatively low score, this indicates restraint. Restraint societies put less emphasis on leisure time or on gratification of their desires. Indulging is not the norm and therefor feels somewhat wrong from people.

Now in today’s time of Corona, how can these Hofstede dimensions help to interpret the actions being taken worldwide in this current pandemic? How to interpret what is happening? And why do for example different countries have such different approach to this pandemic. Let me give you a few illustrative examples: countries with a high score on uncertainty avoidance, like Iran, would like to control as much as possible so therefore they feel more safe with more strict rules than for example the United States. Another example is that countries with a high power distance, like Iran, expect their leaders to tell them what to do. In the Netherlands for example this type of control is not appreciated, which is why Rutte talks about an “intelligent lock down”. And finally, from the dimension of indulgence, when everyone is supposed to stay inside, the beaches in America and Netherlands are still full, because you know, “we really deserve it after staying inside a whole day”. But please do people! Stay healthy, stay inside, save lives. The current situation gives us all a glimpse of how different countries communicate. Being able to understand why a country (or company or person) communicates the way they do from a cultural perspective is a professional benefit for everyone open to a meaningful dialogue with the world around us. If you want to know more specific details, contact me.